SUBSCRIBE TO OUR NEWSLETTER PACKED WITH THE LATEST FASHION TIPS, COUPONS & WEEKLY GIVEAWAYS. 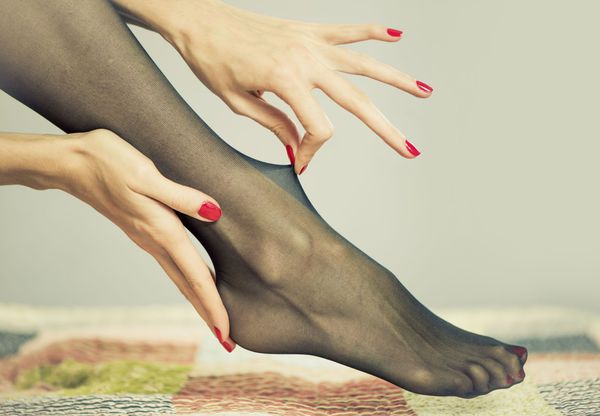 The million-dollar fashion question, the one I’m asked every day without fail from the third week of August for three months, concerns the date from which it is socially acceptable to wear black opaques. To which the simple answer is that the rule is the same for black tights as for oysters: only when there is an R in the month.
Quick shout out to the fishmongers, who are at this very moment are no doubt mobilising to point out that it’s not that simple: I know. (Something about breeding seasons or refrigeration; whatever.)

Funnily enough, it’s not that simple in fashion, either. In certain fashion circles, the answer to the tights question is: only when there is a Z in the month. That is, never in a month of Sundays. Those New York glossy-magazine women who go barelegged all year round are not an urban myth. I have seen with my own eyes their honey-brown legs rising from Alexander McQueen ankle boots on days in February in Manhattan when my face aches with the cold after five minutes outdoors. They are as mystical as unicorns, but flesh-and-blood creatures nonetheless.

The black-tights question is the million-dollar question because it is not just about what you wear. It is about class, and money, and age. It is about how you order the priorities of how you look and what you get done. It is about your postcode and your mindset, your taxi bill and your holiday schedule. The black-tights question is code for: “Are you one of us? Are you a real, normal person I can talk to about how my shoes are killing me, or are you one of the unicorns, chanting glassy-eyed about how you don’t feel the cold?”

This is why the only acceptable answer is the one I borrowed from the oysters. Zero-tolerance of tights is only not annoying if you are a diehard fashionista, the type that wears strange trouser shapes and weird shoes and goofball jewellery. If you are that type of person, you can get away with a year-round no-tights-rule and it seems a charming eccentricity – but on most women, it reeks of pulling rank.

The black-tights issue is fundamental because it separates fashion as actually lived by actual human beings from fashion as seen on models. Like umbrellas, or a Daunts Books bags bulging with trainers and scarves and Kindles, black tights are omnipresent in the real world when there is an R in the month, but remain largely invisible in fashion editorial. What’s more, in the era of 6am Barry’s Bootcamp and Brazilian waxes, when being really quite freaking hardcore about pain is – for better or worse, discuss – way more feminine than baking cupcakes, your willingness to go barelegged is, literally, a black-and-white marker of the degree to which you are prepared to forgo comfort in order to achieve the right look.
I wear black tights, when it gets really cold. But a tiny part of me dies, the first day I do so.
It is also a matter of cold, hard cash. Or, to put it even more brutally, it’s a bus-stop issue. A bare leg is a luxury that signals you have the funds to pull the ripcord and summon an Uber should the wind chill get too much. It is an age issue, too, because bare legs are a youthful look. This is not simply about whether or not you are too old for bare legs, but by going bare-legged you make it clear that you do not believe yourself to be too old for anything, thank you very much.
And then there’s grooming. Thanks to fake tan, that great social-leveller of our age, having brown legs no longer means you actually go on six holidays a year. But legs that are smooth and tanned enough to be bared do require a certain level of attention, and having the time to devote to this is a luxury in its own right.
Debate about when or whether to wear black tights is, therefore, a matrix by which we ask all kinds of other questions. Which, I suppose, is why such an apparently boring question is so compelling. And, indeed, why I can’t give you a straight answer. I will say, though, that I haven’t worn them yet this season. And that I say that with, if I’m honest, some degree of pride.
Powered By Discount Ninja
×
[[BODY]]
[[TIMER_FOOTER]]
×
[[HEADER]]
[[MINIMIZED]]
[[BODY]]
[[FOOTER]]
[[TIMER_FOOTER]]
Powered By Discount Ninja
[[TEXT]]
×
Powered By Discount Ninja
[[HEADER]]
[[BODY]]
[[FOOTER]]
[[NOTHANKSBUTTONLABEL]]
[[NOTHANKSBUTTONLABEL]]
[[TEXT]]
[[HEADER]]
Powered By Discount Ninja
[[BODY]]
[[QUANTITY_LABEL]]
[[PRICE_LABEL]]
[[TIER_ROW]]
[[PRICE]]
[[LABEL]]
[[HEADER]]
[[BODY]]
[[FOOTER]]
[[ROW]]